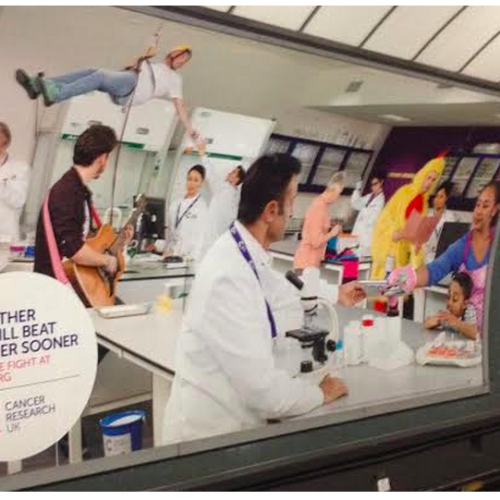 A few months ago, I went to London to attend a conference all about peer-to-peer fundraising…my favourite topic! Ironically, as I was waiting in the tube station I looked across the platform and couldn’t miss this GIANT advertisement from Cancer Research UK promoting their community-driven action program… 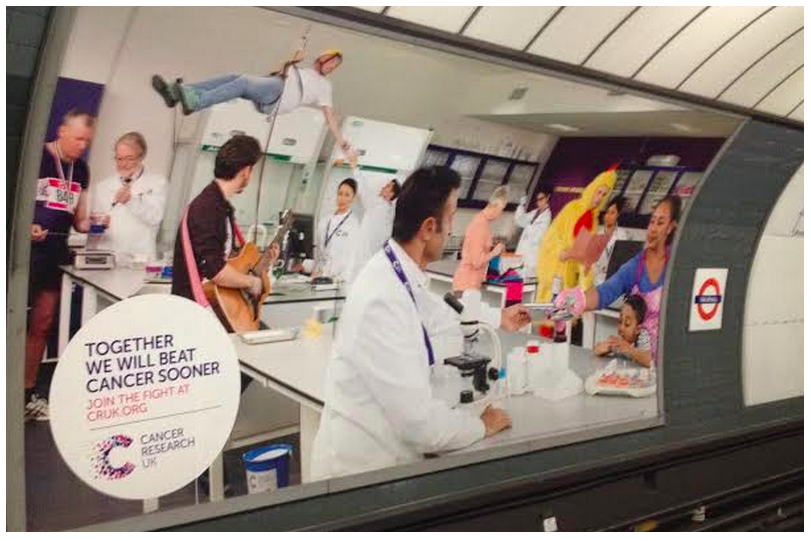 Despite the fact that the train arrived just a few seconds later, I was already impressed and delighted to see a charity doing things right.

While it’s not easy it’s also no rocket science, I see too many charities making a mess of their community-driven action (CDA) programs which is a shame because there is a lot that can be learned from what’s happening in the UK (and other) fundraising markets.

So, on that note, I’d like to share five of the best practices that Cancer Research UK (CRUK) is demonstrating with their CDA program…

Just having a website for a CDA program doesn’t makethe program. Charities need to actively inspire their communities to participate in their CDA program by, 1) Creating a marketing campaign, 2) Making the campaign a priority, 3) Using strong case messaging, and 4) Making it fun.

Inspiration begins by building acomprehensive marketing campaign for the CDA program and aggressively promote it using all available marketing channels and resources including online (with Google ads, Facebook ads, etc), print, outdoor…and even leveraging corporate partner and celebrity networks and (marketing) channels. CRUK’s advertisement on the tube is just one example of the overall investment they made in promoting their program. They also made their CDA program a priorityon their website…featuring fundraising actions (and impact) prominently on their homepage…

But a campaign for a CDA program isn’t successful justbecause a charity makes it a priority and invests in some advertising. The magic lies in creating compelling case messaging–delivering statements of need and statements of impact that demonstrate good stewardship and prove that the charity is worthy of someone’s time to fundraise on their behalf.

Finally, CRUK’s campaign works because it puts the “fun” in fundraising. From the fundraiser in their promotional video who is wearing a bear costume to the woman laughing on the front cover of their (downloadable) “inspiration kit”…they made every attempt to show how good it feels to fundraise.

While P2P fundraising is still relatively new to the European market, we do see signs that a cultural shift is happening–moving from strictly a ‘giving culture’ (people giving direct donations to charity) to an ‘asking culture’ (people starting to fundraise on behalf of a charity). One way that a charity can help create this culture shift within their owncommunity is to make fundraising seem as normal as possible. The more that people see others ‘just like them’doing it successfully while having fun, the more likely they will try it themselves. One way that CRUK uses “normalisation” is by showing people of all races, ages and abilities participating in their program.

It’s also helpful if charities tell stories of normal everyday people who are fundraising…even people who you wouldn’t expect to because they may be too busy…like moms and company executives.

Finally, simply showing the total number of participants who are fundraising can make it seem like the “normal” thing to do. CRUK proudly features this real-time counter at the very center of their homepage. (And, in the time it took to write this article another 28.508 people started an action this month!)

Asking someone to think of a creative fundraising idea on their own can be overwhelming and may deter them from participating altogether. CRUK gives potential fundraisers a whole list of ideasto consider…like this diagram they provide in their (downloadable) inspiration kit. 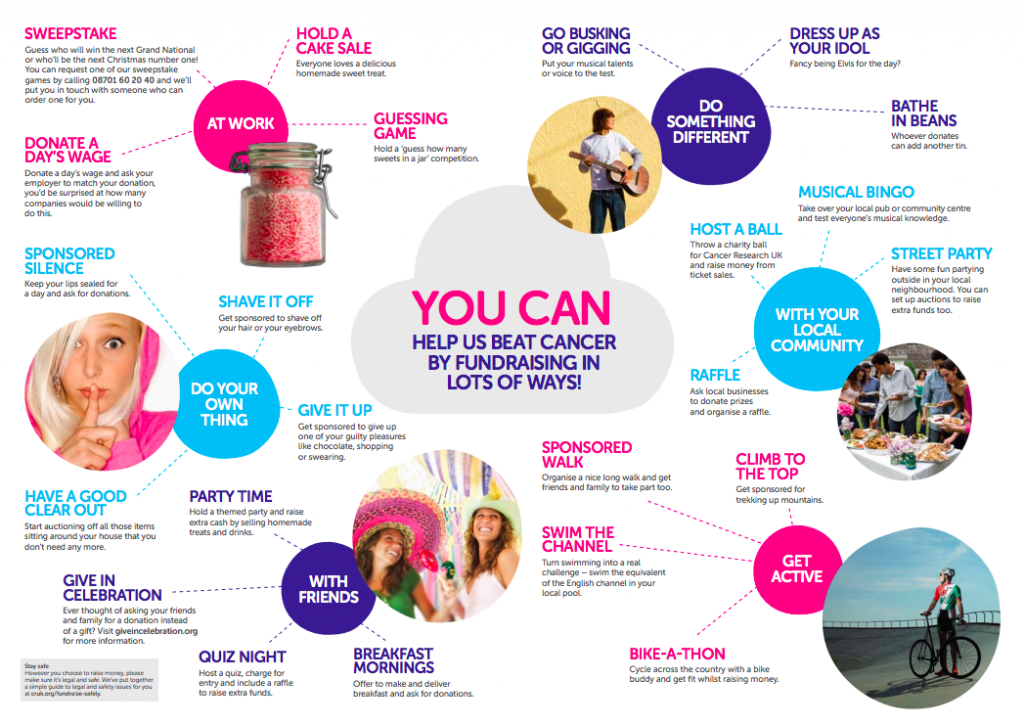 Suggesting a specific actioncan help charities attract and engage a specific audience and can help build a stronger community amongst fundraisers because they share common experiences. Also, promoting a specific action within a set (restricted) time period can help create a sense of urgency and add to the challenge. During January and September of this year, CRUK promoted a specific CDA program called the “Dryathlon” to an (obviously) younger target audience. 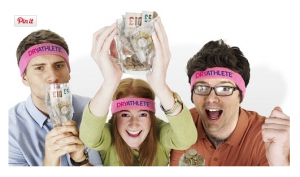 It challenged them to go sober for the entire month and fundraise as part of the challenge. They recruited “Dryathletes” via an online survey asking them to test their willpower…and supported them with specific fundraising tools and badges they could post to their social media.

Inspiring people to register as a fundraiser is only half the battle. How well a charity builds a relationship with their participants and supports them with inspiration, information and tools has the biggest influence on whether a participant actuallyraises funds…and raises as much as they can!

The process of supporting CDA participants can be done mostly via automated email communications and posting tools, information and FAQs on the website.

Another level of support comes in the form of recognition. In general, people care about what otherpeople think of them and they like being recognised for the work they do. This goes for fundraisers as well. When their fundraisers reach certain milestones, CRUK offers them badges which they can post to their Facebook, Twitter and Instagram to show their networks what they’ve accomplished.

When auditing a CDA program for our charity clients, one of the questions we ask ourselves is “How easy is it to start an action…..make a donation….or find the info you need to do XYZ?”  Obviously the fewer the steps, the better…no matter what a charity is asking their fundraisers (or donors) to do. From ordering a fundraising inspiration pack to paying in their money, CRUK does a great job of keeping it simple…taking every opportunity to clearly present the fundraiser’s “next step” in just one simple click.

While they’re not perfect (no charity is), it’s nice to see CRUK setting a solid example for how to inspire, motivate and support people who want to start a fundraising action on their behalf.

It will be interesting to keep an eye on the UK fundraising market to see how it evolves…especially with their CDA programs. In the future, their “best practices” will also evolve as UK charities work to stay competitive, keep their programs fresh, keep their causes relevant and work to retain their fundraisers year-after-year.