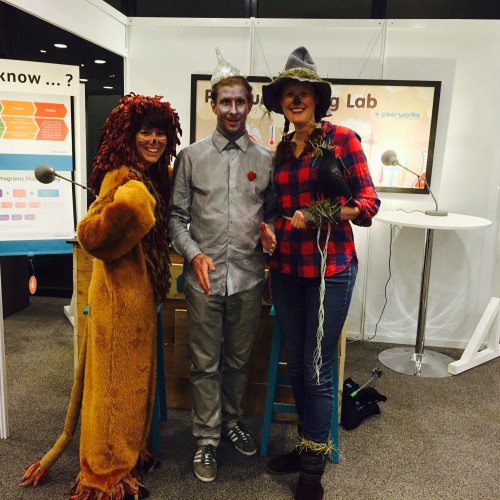 Yes, the rumours are true! We won the (prestigious!?) costume contest at the International Fundraising Congress (IFC)last week! And, for those of you who know us well, it will come to no surprise that 1) we jumped at the chance to participate in the “fancy dress” party, and 2) we are proud of this milestone achievement as this is the first official costume award we have earned as a company. (Yes, we feel this is just the beginning.) 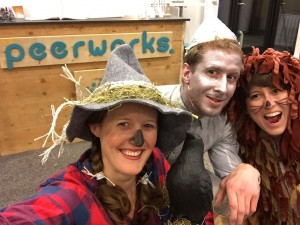 Dressed as the lion (Paola), the scarecrow (Jillian) and the tin man (Arko), we were happy to bring some of the magic from the Wizard of Oz to the world of fundraising….at least for one memorable night.

Now, as we reflect on the incredible time we had with a group of extraordinary fundraisers from all around the world, we’ve also come to realise that our costumes, ironically, represented the three themes that inspired us most throughout the conference…

Courage (The Lion)
No man has demonstrated courage in the world of fundraising quite like Dan Pallotta. From pioneering the multi-day charitable events industry (and inspiring Jillian to join his company, Pallotta TeamWorks, back in 2001)…to delivering his famous TED talk…and now serving as the Founder and CEO of the Charity Defense Council….Dan continues to boldly fight for adequate resources and fair measures of impact on behalf of the entire charity sector. And, as he kicked off this year’s IFC with the opening plenary, he reminded us that courage is essential for innovation and making a “roaring” impact.

Brains (The Scarecrow)
Aside from the fancy dress party, we spent the rest of the IFC dressed like nerdy “peer-to-peer scientists”…but we definitely weren’t the only geeks around. So many bright and talented fundraisers stopped by our “P2P Fundraising Lab” to discuss their ideas for P2P programs at their organisations. And we were certainly impressed by the sessions we attended…most notably Beth Kanter’s “Crash course in design thinking” and the session on peer-to-peer fundraising presented by our new friends Katie Simmons from Diabetes UK and Marco Kuntze from JustGiving. With so much innovative content being shared in nearly every direction at the IFC, the scarecrow would have been proud.

Heart (The Tin Man)
There was no shortage of love at the IFC. We could hear it in the passionate responses of every delegate when we asked them the simple question, “What does your organisation do?” In fact, this is how we fell in love with Fundamor after meeting their fundraiser, Fabrice Toulemonde, who explained that the mission of his Colombian charity is to “transform lives through love”. But, undoubtedly, the biggest love story at the IFC was the one told by Alberto Cairo in his closing plenary speech…as he recounted the many ways he found humanity and dignity while working at the Red Cross in the midst of the war in Afghanistan…proving that the power of the heart can help humanity overcome conflict and facilitate change.

All in all, the IFC certainly re-ignited our passion for the work we do…allowing us to share the knowledge and love we have for peer-to-peer fundraising, and encourage charities who were hesitant to head down the “yellow brick road” of peer-to-peer. (Those bricks are gold for a reason!)

And, yes, we are already thinking about what costumes we’ll be wearing at next year’s IFC! :)